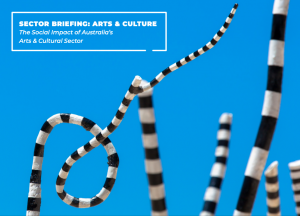 Cultural and creative activity contributed nearly $112 billion to Australia’s economy in 2016-17, when it accounted for 6.4 per cent of Australia’s gross domestic product (GDP). At the start of 2020, the arts and cultural sector employed approximately 195,000 Australians. These sorts of numbers are often cited by the sector, politicians and researchers as a way to demonstrate the value of arts and cultural organisations, who are an important part of the not-for-profit (NFP) sector. But an emphasis on the sector’s contribution to the economy and employment fails to fully capture the depth and breadth of the benefits of Australia’s collective creative endeavour for individuals, communities and society as a whole.

This sector briefing looks at other ways arts and cultural organisations improve our lives, in particular by helping to realise positive social change. The aim of this report, and the UTS Social Impact Toolbox, is to contribute to the ability of members of Australia’s arts and cultural sector to evaluate their programs by making accessible the evidence, methodologies and tools needed to measure and communicate social impact.

This is part of the Making a difference: The social impact of Australia’s arts and cultural sector project, funded by the Nelson Meers Foundation.